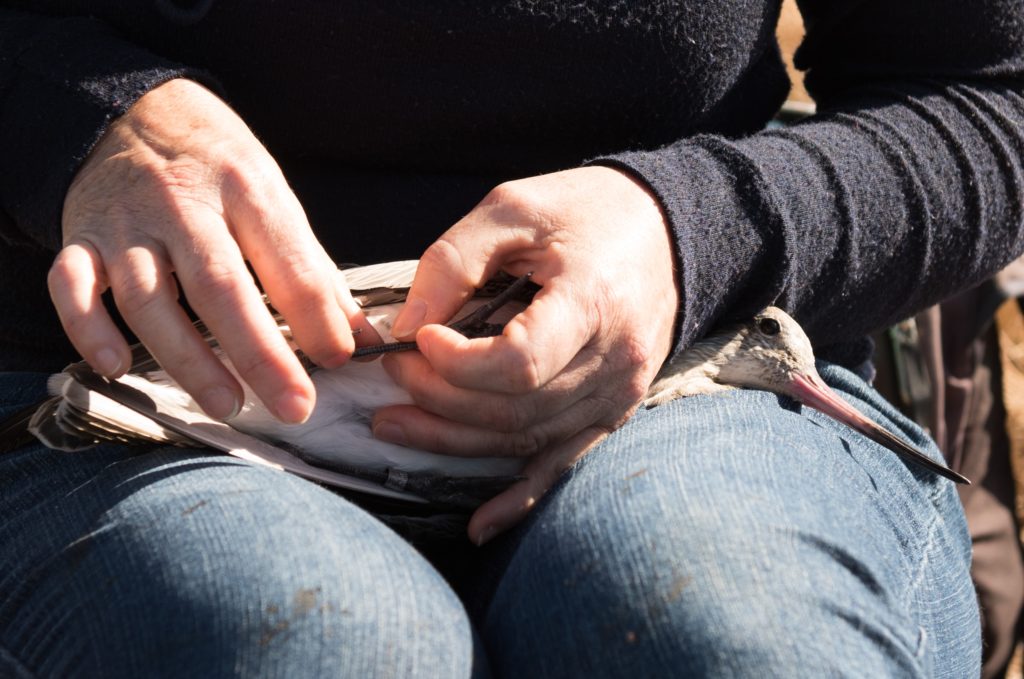 In many countries around the world bird banding (ringing), and marking of animals in general, is regarded as one of the most essential research tools for biologists. Although historically the marking of animals goes back to the Greeks and Romans, the systematic use of marking methods for birds was not initiated until about 1899, when the Danish ornithologist H C Mortensen used individually numbered leg bands in his studies. This was soon taken up by others, and led to the development of national banding schemes in many countries.

In the first few decades of the 20th century some New Zealand researchers, realising the potential of banding and marking techniques, started to make up their own bands, from cigarette tins, aluminium pots or other materials, cut up and engraved with numbers. These methods, however, were soon regarded as unsatisfactory and by the late 1940’s, when the scale of banding increased, a national scheme was proposed. In 1950 the Ornithological Society/Birds New Zealand organised a scheme, using the then Dominion Museum for its return address. Meanwhile, the Wildlife Branch of the Department of Internal Affairs had been banding game birds since 1947, using the Department’s address on their bands.

Initially both schemes operated beside each other, with the Wildlife Branch banding game birds, Birds New Zealand all other native and introduced species. The Birds New Zealand scheme was run initially on an honorary basis, but the growth in the number of birds banded each year, as well as the increasing cost of running the scheme, proved too much for the Society. In 1962 an offer from the Dominion Museum to take over the running of the scheme was gladly accepted.

The merger of the two schemes facilitated a professional administrative approach to all banding, and methods for more sophisticated data handling and analysis. The New Zealand scheme became one of the first in the world to take advantage of computer technology.

Over the years the banding scheme has flourished. The moderate numbers of birds banded annually in the early days have increased steadily to an average of 20,000 – 25,000 birds a year, with a present total of over 1.5 million birds banded. The computer system presently holds recovery records for some 170,000 individuals and more than 270,000 records when live repeat recoveries are included.

To band or mark animals they must first be caught. Where this applies to birds, there are many capture techniques available. The more commonly used methods are traps (either self-operated, like drop traps, or those triggered mechanically, or by hand), mist nets and hand capture. Methods like cannon nets, where a net is propelled by projectiles to land over a flock of roosting birds such as waders, require special skills and are not widely used. Please note that you need a valid Wildlife Act Authorisation to capture, handle or mark wildlife.

Some 23 different band sizes are available, with internal diameters ranging from 2 to 22 mm. Most bands are designed to be round when closed round the leg, but there are several specially designed bands. Some are oval and used on birds with ‘flat’ legs, like shearwaters. Penguins cannot be banded on the legs as these are feathered and stubby, so bands are designed to fit around the base of the flipper.

Each band has its own prefix (which also denotes the size), an individual serial number and a return address. This facilitates the unique identification of each banded bird.

Early on, most bands were made of aluminium, aluminium alloys or monel, but now most are made from stainless steel except for the smallest sizes. Stainless steel (New Zealand pioneered the use of it!) has the advantage of being very hard, thus alleviating most problems with wear or corrosion experienced with other metals.

The use of colour bands is widespread in many modern bird studies. These allow for remote observations of individuals in a study population without the necessity for frequent recapture, thus minimising disturbance. Sometimes the same single colour or combination is used on a number of individuals within a population. In this case the colours indicate a year class or locality group.

Internationally, the controlled use of coloured leg flags (basically colour bands with a piece sticking out like a miniature flag) has been developed. Each participating country has its own regional colour (white for New Zealand). This technique helps to establish the flyways for migrating waders.

An increasingly popular tool, used in conjunction with leg bands, is a radio transmitter (sometimes combined with data logging sensors) which enables the marked bird to be tracked from the ground for short distances or internationally by satellite. Though expensive, the results obtained allow detailed tracking of an individual throughout the life of the battery, often in areas where banding recoveries would be impossible.

Bird banding and marking techniques in New Zealand have supported the study of over 200 different species. For most of these species, data on seasonal movements, ecology and behaviour, dispersal, survival and mortality, longevity etc. are still accumulating.

The New Zealand National Bird Banding Scheme and any study it facilitates, to be successful, depends on recoveries. These come from three main sources: birds found dead, birds recaptured, and birds identified from their colour combination or by reading the metal band number with the help of binoculars or a telescope, or photographing the bands.

Members of OSNZ should be aware of the importance of recoveries and sightings, as well as the procedure to report them.

If you see a banded bird and can read the band number (or part thereof) or colour combination with binoculars or a telescope, read the complete number (or combination) twice, write it down immediately and report it. High-resolution photographs can also be submitted.

Bands from dead birds can be posted to the Banding Office at PO Box 108, Wellington, 6140. Please ensure that you flatten the band and stick it to a sheet of paper detailing the information listed below.

Do not capture live birds to read band numbers unless you are certified with the Banding Scheme, and hold a relevant Wildlife Act Authorisation to do so.

Banded birds (dead or alive, gamebird or exotic or native species) can be reported online – or you can download the Band reporting form here

Alternatively, email the Banding Office with the following details:

How to become a certified bander

The banding certification system ensures that bird banders are suitably trained and have met minimum qualifications.

Information regarding the Banding Certification process can be found here.